Over my many years I have had many hobbies and leisure interests, but the one I’ve had longest, and which I enjoy regularly now even in my dotage is photography. So it is natural to express that in this blog. 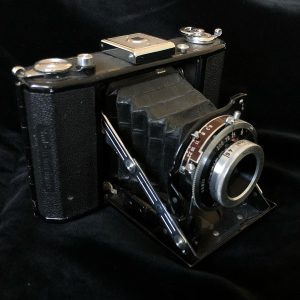 I still have every camera I have ever used and they are in the featured image of this post  along with a couple of collected vintage cameras. My first was the folding 2.25” square Zeiss Nettar seen here.  It was given to me when I was 14 years old by my older brother who was a photographer in the Royal Air Force though he used very different cameras in his trade! It took 120 film, 12 shots to a roll, and I very soon acquired and learned to use a Paterson developing tank and a contact printing frame.

Next came a 35mm Zeiss Contina. This took 36 shots per roll and the smaller negative demanded that I buy an enlarger which allowed larger prints. 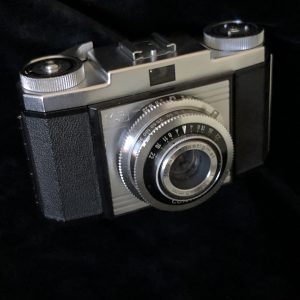 Natural progress led to an SLR with interchangeable lenses, specifically the Pentax Spotmatic shown here. And when I went digital the obvious choice was a Pentax Kr which took the same lenses. 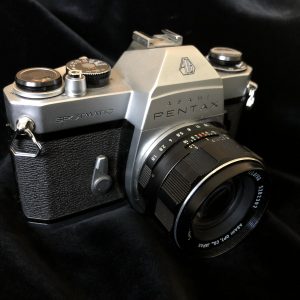 But SLRs with their bags of lenses and filters were bulky so I also had compact cameras like the Pentax compact on the bottom row and the Fujinon. But the ultimate in portability came with the iPhone. Originally bought to serve as a mobile phone its photographic possibilities were soon pressed into use, and today I make all my photos on my phone. And of course I do a lot of my post-processing on the phone too – the Snapseed app is a serious rival to the expensive Photoshop and is completely free: more of this in later posts, perhaps.

So that’s me these days: an iPhonographer but still, in my estimation, still a serious photographer and it seems to me that more and more photographers are now following that trend especially now the phone makers are rapidly ramping up the definition and versatility of their products. And after all, it is a commonly repeated truism that the best camera is the one you have with you. And I’m never without mine because you never know, I might receive a telephone call on it!